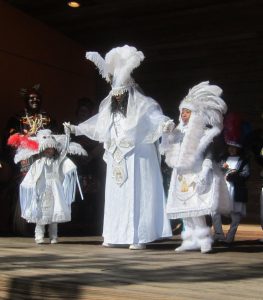 Queen Reesie and young Guardians of the Flame

When I met Cherice Harrison Nelson for the first time I didn’t realize I was meeting a legend. Tall and regal, known as Queen Reesie to many, Cherice carries herself like a queen. Hovering in a cloud of chicory and milk foam, we met at CC’s Coffee on Magazine Street and got to know one another. I learned about the Mardi Gras Indians from someone who masks each year, learning about the history, the beginnings as well as the struggles and triumphs of African Americans in New Orleans. Cherice is a teacher, first and foremost and sitting there sipping our coffee, it was clear that her heart was bigger than any city, any costume could contain.

Cherice told me about her efforts to advance education and literacy. She came by it naturally. Her father, Chief Donald Harrison made sure his kids knew the value of education. Her mother, Herreast Harrison regularly applies for grants to purchase books for children in the neighborhood schools. Education is held in the highest regard. Cherice’s suits aren’t just beautiful, they tell a story. Of rising in the face of trouble, of overcoming barriers, the beads speak volumes. 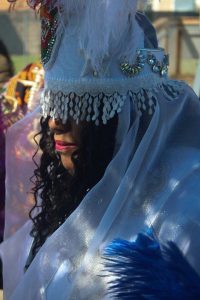 Mardi Gras Indian community. We decided that currently masking Indians would be eligible to receive a machine and to be on Cherice’s list–a list we’d honor whenever I delivered a truckload of sewing machines. With each visit we’d get together and the people would come, introducing themselves, their “gang”, their role. Yellow Pocahontas, Creole Wild West, Spy Boy, Wild Man, Queen, with each introduction I’d learn a little more.

When friends of mine in Madison, teachers calling themselves the Book Rescuers, gathered boxes of books discarded from Madison Public School libraries, we loaded them into my rental truck along with the sewing machines and I delivered them to New Orleans. Cherice would do the work on that end, lining up a school library to receive the books. I’d wind the truck through the alley onto the playground and students would meet me to help carry the books to the library area.

One year, during an April visit, Cherice asked if I’d like to go to Super Sunday with her. Knowing nothing about the event, I said “yes!” and off we went. Perched on someone’s concrete step we watched as the Indians paraded by. Super Sunday is one of three days during the year that traditionally, Indians are out in their suits. Gang after gang, eye goggling suit after suit, a rainbow of movement. I ran to the curb to take a picture and Cherice was right behind me. “You can’t just run up to a Big Chief,” she said, “there’s protocol.” Permission must be granted to approach the Chief. I listened as Cherice paid the highest compliment, “Pretty pretty Big Chief!!” and I learned that competition through the complexity of suits is held in the highest regard.

Super Sunday falls on March 17 this year and we will be there, alongside Cherice. We’ll pay our respects and we’ll holler our compliments.