We are proud of the international work we’ve done. We continue to work with the groups with whom we’ve established partnerships.
Due to limited resources, we are not currently accepting new international applications for machines. 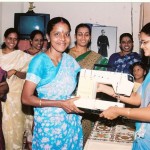 Sri Lanka
In 2005 the Sewing Machine Project sent 25 sewing machines to orphanages in Sri Lanka, offering the children a tool to learn a trade and the caretakers a tool to make clothing for the children. 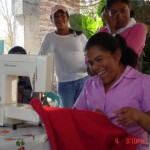 Mexico
We have donated machines to the ranchos La Joya and  La Cruz del Palmar in San Miguel de Allende in  the state of Guanajuato in the central highlands of Mexico. Up to 84 women work out of the cooperative, sewing goods to sell and support themselves. The women are gradually seeing the completion of a new sewing center on the Rancho where they live and once completed, the SMP will supply machines for their sewing center. 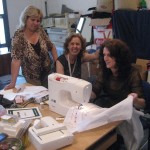 Kosovo
In 2009 we delivered 19 machines to Skenderaj, Kosovo. 16 of these machines were donated by Bernina, International of Steckborn, Switzerland. The Antigona NGO of Skenderaj will use the machines for custom garment sewing as well as to train new sewers to add to their group. There are so many war widows in this region and we are pleased to be able to help them to become self-sustaining through sewing.

India
We have shipped machines to the Apne Aap group in New Delhi, India. Apne Aap means “on our own” and this fine organization empowers young women by teaching sewing skills so that they will have a reliable source of income to keep them out of the sex trades.

Liberia
SMP machines have gone to help a women’s technical school which offers a new tailoring program. They graduated their first tailoring class in 2011.

El Salvador
Habitat for Humanity workers hand deliver SMP machines to the “Strengthening the Community” project in the Getsemani Community in Ahuachapan, El Salvador. Sewing students are creating items to sell to support their families.

Guatemala
In 2013 we shipped 83 machines to Panajachel, Guatemala. Working with the Mayan Families group, whose mission is to “Educate, Feed, Shelter, Heal”, we supported their sewing program. Students are learning new skills for supporting their families and communities. Additionally, we send machines to missions in Patzun, Guatemala, where community members learn to sew for their families and create pieces to sell.