Wing and a prayer 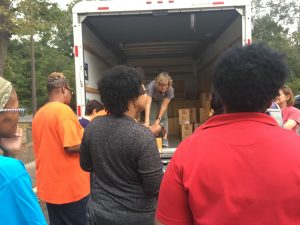 The idea came to me so vividly. We would soon be traveling to Houston for the International Quilt Festival to set up a booth and share The Sewing Machine Project. Houston. And every sewing machine brand would be at the Festival as well. Houston.

Hmmmm, I wondered, would some of the sewing machine manufacturers be willing to share machines that we could pick up in Houston and distribute to those who lost everything in the storm? I rolled it around in my head. This might work. I sent some emails to manufacturers and to AllBrands, a nationwide sewing machine distributor. And I waited. Quickly, more quickly than anticipated, the answers came back–Bernina. Babylock. AllBrands. “Sure,” they said, “what do you need?” 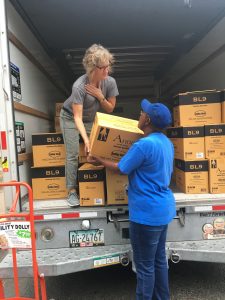 And so it began.

Altogether, these three generous companies donated 110 sewing machines. They’d be waiting in Houston. I looked at a map, I made some calls, I located community centers in hard hit areas–areas where most residents were still in shelters–areas where residents would be struggling so much. And bonus, the community centers offered sewing lessons, quilting groups, so I knew there were sewers.

On Tuesday October 31st, I, along with my friend and board member, Kim, rented a 15′ UHaul truck and picked up 110 sewing machines. Every step of the way, whether loading machines off the loading dock, finding someone with a pallet jack in a cavernous conference hall, unsticking a stuck door on the UHaul, every step there was someone there to help us. An angel. A bodhisattva. 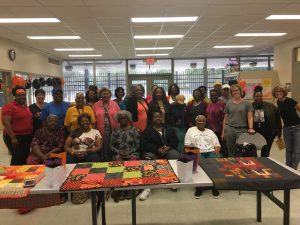 At 4:45 we arrived at the first community center, greeted by ladies who had been waiting since 2:00. We talked, we hugged, we laughed, we cried, we listened to stories of loss. We handed out machines.

And in that moment, in that magic moment, we all were bound together by this understanding that sewing heals and a sewing machine can make a difference.

Our deepest gratitude to Bernina, to Babylock, to AllBrands for their compassion and generosity.