One of the most important jobs we share as Sewing Machine Project board members is application review. Over the years this process has evolved quite a bit. During the early days…I’m talking 10 years ago…we didn’t even have a board. I worked originally with members of our local chapter of the 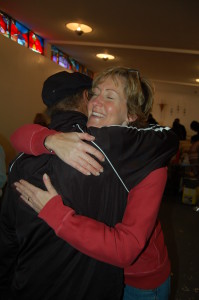 American Hindu Association and they identified groups in Southeast Asia–orphanages– with whom they worked–groups that were experiencing such great need. Relationships had been established before we (The Sewing Machine Project) ever came on the scene and our job was to prepare and pack sewing machines to accompany their shipments of medical supplies and other necessities after the tsunami that had devastated the area. Everyone was struggling and the machines we sent offered hope and possibility as those who worked with the children in these centers were able to sew for the kids as well as teach them a trade.

When Hurricane Katrina roared on through New Orleans and the levees failed I loaded up a van with machines and drove down, not knowing who I’d find or if there was even a need for these tools. Initially believing I’d deliver machines and that would be it, I quickly discovered need beyond need and knew that my mission had just begun in that region. A database of 600 names was the tool and over the course of a few years we worked through that list. New Orleans continues to be one of our focus areas as we deliver sets of machines to community groups. Really, the task has gone from disaster relief to community support but make no mistake, Need still exists.

But when I look at the numbers…the numbers! We’ve delivered over 1800 sewing machines in 10 years and the groups, the applications, the stories have been varied beyond anything I could have ever dreamed. Need wears many faces. Our most recently approved applications include a group helping kids with pregnancy prevention along with support for young parents. Who’d have guessed that sewing machines could help? But they will. The leaders of this program are introducing sewing not only as skill development but also as a way to teach kids the value of helping others. Students who take part in the sewing program will be creating necessities–pillowcases, blankets–for the low-income community, teaching a valuable lesson of looking beyond self as well as a reminder of the responsibility each and every one of us carries to help one another.

A Wisconsin-based group plans to reach out through sewing to newly immigrated members of their community. Offering skills and a hand in friendship, this group plans to teach sewing to women who have never used an electric machine before and I was touched by the point they made in their application that since electric machines will be new to these students the volunteer teachers look forward to sitting close, one on one, and ensuring that relationships are established, that deeper needs are addressed, as sewing lessons are learned.

We have sent machines to war widows, to shelters where women hide from abusers, to groups hoping only to teach people in very poor communities to make curtains for their homes so they feel a bit more privacy, to community colleges whose faculty opts to teach free classes to those in the community who can’t afford to attend regular classes, to groups working on bringing communities in conflict closer together, and on and on. I’ve learned that Need is a hard thing to define. Its boundaries exceed anything we can see or that can be accurately described in a written application. It’s almost more accurate to say that it’s something that must be felt.  And over and over we see that what The Sewing Machine Project offers goes much deeper than the machines themselves. When people come together to sew, conversation happens, relationships grow in breadth and depth, hearts are mended. Needs that are not evident on the surface are revealed and answered.

Such ingenuity! such creativity! such kindness! such compassion! all pours forth from each application–people recognizing Need, people offering a hand. And I see these same qualities in the board members with whom I work and have worked with over the years. Applications are carefully considered and discussed and the bigger questions arise. We hark back to our Vision and Mission statements to make sure our decisions are aligned. We argue. We smile. We laugh. We learn again and again that we are never done learning.

And over and over we see that Need wears so many faces–some familiar, many new. No one is exempt but Need shows up in each of us in different ways and it is up to us to recognize it in ourselves and each other and help each other along.

We passionately believe in the possibility a sewing machine embodies. We believe that everyone has the power to make the world a better place. So we share sewing machines–creating partnerships, strengthening community and nurturing the creative spirit.