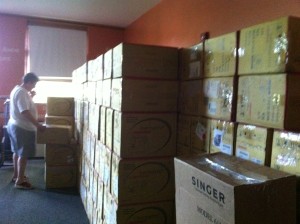 We kind of have a “thing” going with Bernina. I guess you could say we’re “in a relationship” although I haven’t updated our Facebook status. But over the years, Bernina has been incredibly kind to The Sewing Machine Project.

Back in 2008, Bernina featured its first “Give and Get Back” promotion where people could trade in their old machine, designating it to be given to a charitable group, and they received a discount on a new Bernina. And that charitable group was…you guessed it…The Sewing Machine Project. They repeated that sweet promotion in 2013. Some machines came our way and some were donated within the communities that each dealership called home. No matter where the machines ended up we were grateful that the directive was to place sewing machines in the hands of people who otherwise were unable to purchase them for themselves. And people got to learn about The Sewing Machine Project to boot! 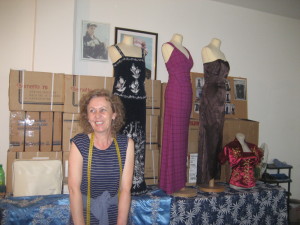 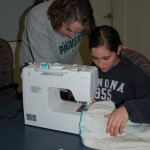 Bernina International-Switzerland donated sewing machines in 2009 which ended up going to Kosovo. These machines made a dream come true when a small women’s collective was able to use them to educate other war widows in their region, helping them learn skills they could use to support their families.

Bernina of America donated machines that were used for our Sewing Shares program. The goal of this program was to loan machines to local groups for basic sewing education.

In 2012 Bernina of America donated over 300 machines that have gone in sets to groups around the country. What a blessing to be able to donate matching machines! 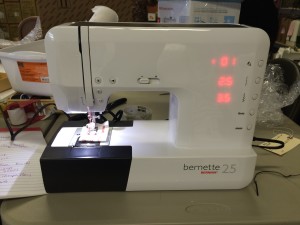 And most recently, we received a surprise gift of 10 Bernette machines from Bernina of America. These machines just left yesterday, traveling to a camp in the Eastern US where girls will learn to sew as part of a summer program–girls who usually wouldn’t have this opportunity, girls whose camp fees are paid by scholarship.

We are honored to work with a company that raises the importance of community and giving back into the spotlight and we are so grateful for these gifts which allow us to do the same.