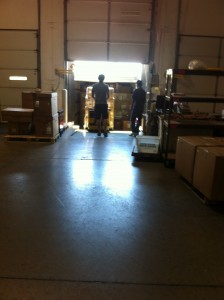 One after another the pallets are loaded onto the truck

In late February I met Tom Justic, VP of Sales for Bernina of America.I told him about The Sewing Machine Project’s mission and what we’re all about. He pondered all of this a minute and said “I think we might have some machines for you.” Turns out they had some machines in the warehouse that had been a bit blemished but worked just fine.

It took a few months to pull it together but last Friday I drove down to Aurora with Becky Jollay (volunteer extraordinaire…) in a rented 16′ truck to pick up the machines.  325 sewing machines later we were on our way back! We’ll need to check over the machines to make sure they’re working properly but wow!!! what a gift!

We’ll need to see how many machines we really have once they’re all checked over. A portion of these will most likely be going to our newest partners, Mayan Families, in Guatemala. Will update you on that later! 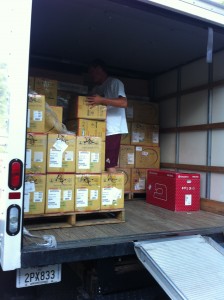