The windows are in! 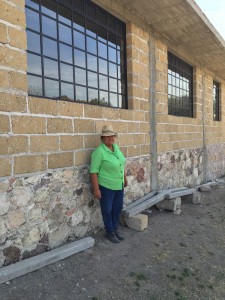 You may remember that last year we received a very generous donation which was earmarked to help the ladies who live on the Rancho la Joya outside of San Miguel de Allende in Mexico. We’ve known this group for quite some time, first introduced by our friend, Cherie St. Cyr. The goal of the group, led by a woman named Angeles, is to create a sewing school/workshop on their land at the rancho but it’s been slow going.

When we received Sonia’s generous gift we proceeded carefully, being careful to ensure that we “shepherded” this donation very carefully and chose wisely in how to spend it. Working with a local contractor in their area we chose from a few options on how to move forward with the building, as it wasn’t possible to cover all of the remaining expenses with the money we had.

We chose windows. Big, beautiful windows which allow lots of light into the building as well 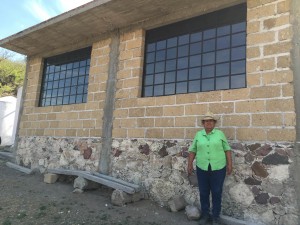 as keeping it secure. We wanted this step to make the building weather-tight as well, and now it is.

I’m thrilled to share pictures of Angeles proudly standing outside of the building that’s one step closer to being a finished sewing school.