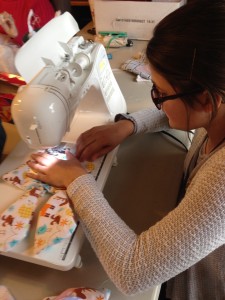 Back in August I delivered 10 sewing machines to the sweetest bunch of girls you’d ever want to meet. They call themselves “The Sewing Girls” and they live in rural Louisiana. Oh my, they had big plans! Not only did they want to complete some 4H requirements but they also planned on making curtains for their school library along with a long list of other projects. I shared their proposal with SVP (Singer/Viking/Pfaff) and they generously made it happen, donating 10 brand new matching machines!

The Sewing Girls love to sew…it’s abundantly clear. Their leader, a teacher named Miss Paulette, is a firecracker…invested and excited and continually igniting the girls’ passion for sewing.

Just last week I received a series of text messages with pictures, led with this message: 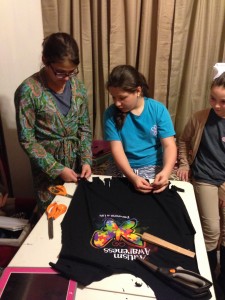 The girls were having a big sewing day, preceded by a sleepover the night before. During their sleepover they upcycled tshirts.  Their official sewing day was dedicated to making “heartstrings and angel wings”…clothing for babies in the neonatal intensive care unit at a nearby hospital.

Sewing, community, paying it forward. It doesn’t get much better than that!