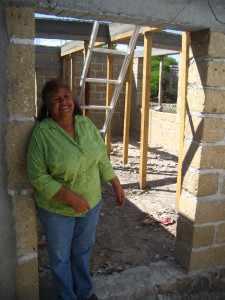 Angeles and her sweet sewing school

The ladies of Rancho la Joya in Mexico are a resilient bunch. The land that supports and sustains them is rocky and dry with a beating sun that will send you running for shade. I was fortunate to visit in 2012 after my sweet friend, Cherie shined a light on them for me. These ladies are sewers or would-be sewers. Their lives play out on this dry land just far enough from the city to make it difficult to get there regularly. Led by a force of a woman named Angeles they are recreating themselves into a sewing cooperative.

Angeles’ vision began years ago, imagining a sewing school and workroom right there on their land. She imagined the women of the Rancho being able to do contract sewing so they could be near their homes and children. So vivid was her vision that she sold her cow and her bull to gather seed money for construction. This got the walls up.

Angeles envisioned a garden adjoining the sewing room where women could grow food for their families. She wrote a government grant to erect two cisterns, gathering precious rain for nurturing their crops. 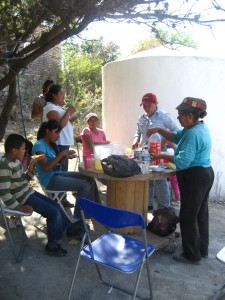 The ladies make us lunch

When I visited the Rancho this is where things were–the walls were up on the little sewing space and the cisterns were up and running. Since my visit they’ve added a roof and a floor to the building. They still need to add windows and doors and seal the whole thing. I’ve told the group that The Sewing Machine Project will step in with sewing machines and supplies once the building is watertight.

But money is hard to come by and it’s easy to lose hope. It’s not easy to sustain that long view when funding is nowhere in sight. No doubt there are days when Angeles wonders if this will ever get done. She needs about $2000 to finish the building.

A month or so ago I received an email from a woman named Sonia. She was interested in making an online donation but didn’t see a place in the process to note that this donation was being made in honor of her mother. So we talked back and forth, smoothed out the process, and Sonia made a significant donation to the Sewing Machine Project. “My mother was a sewer in Mexico,” she noted “and I’d like these funds to specifically help the group in Mexico that The Sewing Machine Project supports.” “Oh, and more funding will be coming,” she added. The whole donation should total $2000.

I wrote to Sonia explaining where things were with Rancho la Joya’s project, asking how she would like the money spent. Would you be ok with the money helping with construction or would you like this to go for sewing machines and tools? I sent pictures of Angeles, the unfinished building, and the group of ladies involved.

Sonia wrote back within hours. “I’m printing the pictures you sent and will put them by my mother’s picture,” she wrote, “by all means, use this money to help them finish their building–let’s get these women sewing!” 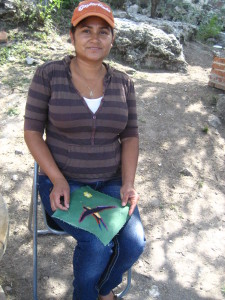 Beautiful hand sewing is a hallmark of these talented ladies

And so we are. Working now to iron out the details of a money transfer, waiting anxiously to hear the details of the continued building project. Sharing information between a donor here and a group there, connected through sewing and love. We wait and smile and take a long view, imagining with Angeles, a finished, thriving sewing room on a tiny Rancho in Mexico.