I’ll admit it…this weekend started out jangly. My mind and heart were rambling to places they shouldn’t go but sometimes, knowing these things isn’t enough to change them. Rather, I find it better to try and be still and figure out what it is I’m supposed to learn from all of this. I considered heading out of town with friends, to be with them of course, but admittedly, also to just distract myself from my swirling mind. But Friday afternoon I decided to just stay put and let things unfold…and I’m so glad I did. 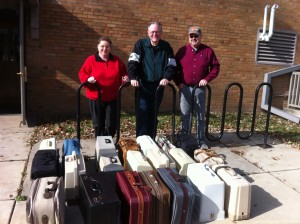 Saturday morning I’d arranged with my new friends, Michelle and Lou, to meet at the church–they had another load of machines to deliver all the way from Iowa. Now, I know I’ve mentioned them before, but they deserve mentioning again. Michelle loves to refurbish vintage sewing machines…and I’m not talking about just wiping them down with a towel…she takes them apart and works and cleans them until they absolutely purr. Her husband, Lou, has his own hobbies, which include creating custom pool cues, but that’s another story…Lou steps in when Michelle meets a part that she needs retooled or something that’s just not working quite right, and between the two of them they work miracles on these old machines.

Michelle told me that one day she’d had to scrap three machines…almost killed her to do it. But smiling, Lou puts his arm around her and says “yep, blew a little wind on her light,” and she smiles up at him. It’s hard to describe the layers of what they bring to me and The Sewing Machine Project but between the beautiful machines, delivered from Iowa (!) and their love for each other and their belief in what I do, I find that when I’m in their presence I am brought right into the moment and the lessons abound.

Later that day I received an email from the daughter of a dear friend who is doing some gratis graphics work for the SMP. She’d reworked some things that sorely needed updating and there were the finished documents, waiting for me with a sweet note.

In the late afternoon I went walking with a friend and our dogs and between the down to earth discussions and the glee that radiated from our dogs on the crisp autumn afternoon I couldn’t help but smile. 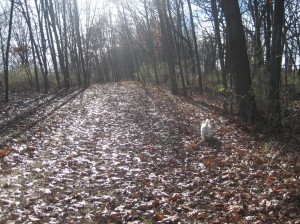 Sometimes all it takes is quieting down and paying attention to be reminded of all of the grace that’s right here all the time. I’m not saying we’re not allowed our difficult days (in fact I just noticed a “pin” on Pinterest that said “I’ll be okay, just not today”) but isn’t it glorious when we come back to where we are and realize that we’re enough?