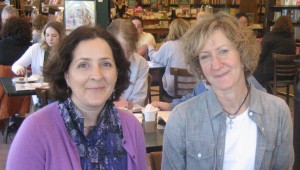 I drove to St. Louis and back yesterday. Not my normal mo, but this was a special trip.

I’ve been corresponding lately with Frances Harrison, the woman who wrote the article I read after the tsunami hit Sri Lanka in late 2004. Ms. Harrison’s article struck me so deeply that I was moved to begin collecting sewing machines…machines that would make their way to Sri Lanka and India, and then to other corners of the world. Something in her words, in the content opened a door to an entirely new path. When she mentioned that she was visiting St. Louis I at first thought, oh no, too far. But as the idea, the story, the woman continued to swirl around in my head, I knew…absolutely knew…that I needed to go and meet her. I needed to tell her in person what an impact her words had had on me and ultimately, on so many people through The Sewing Machine Project.

So I drove to St. Louis and met her in a coffee house. We hugged and talked, discussing the serendipity of it all as well as some concrete ideas about how we might collaborate in the future. We talked about the possibility of my visiting Sri Lanka and looking in on the woman she’d written about, about checking in on the orphanages that received our machines. As we finished our conversation there was a moment of silence as we just looked at each other and quietly thanked each other.

Imagine, two women connecting through words over the miles, one from London, one from Wisconsin. Imagine one woman’s words moving the other to create a way to help people. Imagine that writer not even knowing that her words had such impact and imagine her finally realizing the power of her words. Just Imagine.